PLAN OF A TRICLINIUM.

will show this sufficiently without elaborate description; but it is necessary to notice that the host always or almost always occupied the couch marked H on the plan, while the one immediately above him, i.e. No. 3 of the lectus medius, was reserved for the most important guest, and called lectus consularis. Plutarch's account, and a little consideration, will show that the host was thus well placed for the superintendence of the meal, as well as for conversation with his distinguished guest; and that the latter occupied what Plutarch calls a free corner, so that any messengers or other persons needing to see him could get access to him without disturbing the party.[445] The number that could be accommodated, nine, was not only a sacred and lucky one, but exactly suited for convenience of conversation and attendance. Larger parties were not unheard of, even under the Republic, and Vitruvius tells us that some dining-rooms were fitted with three or more triclinia; but to put more than three guests on a single couch, and so increase the number, was not thought courteous or well-bred. Among the points of bad breeding which Cicero attributes to his enemy Calpurnius Piso, the consul of 58, one was that he put five guests to recline on a single couch, while himself occupying one alone; so Horace:

As the guests were made so comfortable, it may be supposed that they were not in a hurry to depart; the mere fact that they were reclining instead of sitting would naturally dispose them to stay. The triclinia were open at one end, i.e. not shut up as our dining-rooms are, and the air would not get close and "dinnery." Cicero describes old Cato[447] (no doubt from some passage in Cato's writings) as remaining in conversation at dinner until late at night. The guests would arrive with their slaves, who took off their walking shoes, if they had come on foot, and put on their sandals (soleae): each wore a festive dress (synthesis), of Greek origin like the other features of the entertainment, and there was no question of changing these again in a hurry. Nothing can better show the difference between the old Roman manners and the new than the character of these parties; they are the leisurely and comfortable rendezvous of an opulent and educated society, in which politics, literature or philosophy could be discussed with much self-satisfaction. That such discussion did not go too deeply into hard questions was perhaps the result of the comfort.

There was of course another side to this picture of the evening of a Roman gentleman. There was a coarse side to the Roman character, and in the age when wealth, the slave trade, and idle habits encouraged self-indulgence, meals were apt to become ends in themselves instead of necessary aids to a wholesome life. The ordinary three parts or courses (mensae) of a dinner,--the gustatio or light preliminary course, the cena proper, with substantial dishes, and the dessert of pastry and fruit, could be amplified and extended to an unlimited extent by the skill of the slave-cooks brought from Greece and the East (see above, p. 209); the gourmand had appeared long before the age of Cicero and had been already satirised by Lucilius and Varro.[448] Splendid dinner-services might take the place of the old simple ware, and luxurious drapery and rugs covered the couches instead of the skins of animals, as in the old time.[449] Vulgarity and ostentation, such as Horace satirised, were doubtless too often to be met with. Those who lived for feasting and enjoyment would invite their company quite early in the day (tempestativum convivium) and carry on the revelry till midnight.[450] And lastly, the practice of drinking wine after dinner (comissatio), simply for the sake of drinking, under fixed rules according to the Greek fashion, familiar to us all in the Odes of Horace, had undoubtedly begun some time before the end of the Public. In the Actio prima of his Verrine orations Cicero gives a graphic picture of a convivium beginning early, where the proposal was made and agreed to that the drinking should be "more graeco."[451]

But it would be a great mistake to suppose that this kind of self-indulgence was characteristic of the average Roman life of this age. The ordinary student is liable to fall into this error because he reads his Horace and his Juvenal, but dips a very little way into Cicero's correspondence; and he needs to be reminded that the satirists are not deriding the average life of the citizen, any more than the artists who make fun of the foibles of our own day in the pages of Punch. Cicero hardly ever mentions his meals, his cookery, or his wine, even in his most chatty letters; such matters did not interest him, and do not seem to have interested his friends, so far as we can judge by their letters. In one amusing letter to Poetus, he does indeed tell him what he had for dinner at a friend's house, but only by way of explaining that he had been very unwell from eating mushrooms and such dishes, which his host had had cooked in order not to contravene a recent sumptuary law.[452] The Letters are worth far more as negative evidence of the usual character of dinners than either the invectives (vituperationes) against a Piso or an Antony, or the lively wit of the satirists. Let us return for an instant, in conclusion, to that famous letter, already quoted, in which Cicero describes the entertainment of Caesar at Cumae in December, 45. It contains an expression which has given rise to very mistaken conclusions both about Caesar's own habits and those of his day. After telling Atticus that his guest sat down to dinner when the bath was over he goes on: "[Greek: Emetikaen] agebat; itaque et edit et bibit [Greek: adeos] et iucunde, opipare sane et apparate, nec id solum, sed

Even good scholars used formerly to make the mistake of supposing that Caesar, a man habitually abstemious, or at least temperate, had made up his mind to over-eat himself on this occasion, as he was intending to take an emetic afterwards. And even now it may be as well to point out that medical treatment by a course of emetics was a perfectly well known and valued method at this time;[453] that Caesar, whose health was always delicate, and at this time severely tried, was then under this treatment, and could therefore eat his dinner comfortably, without troubling himself about what he ate and drank: and that the apt quotation from Lucilius, and the literary conversation which (so Cicero adds) followed the dinner, prove beyond all question that this was no glutton's meal, but one of that ordinary and rational type, in which repose and pleasant intercourse counted for more than the mere eating and drinking.

No more work seems to have been done after the cena was over and the guests had retired. We found Cicero on one occasion going to bed soon after the meal; and, as he was up and active so early in the morning, we may suppose that he retired at a much earlier hour than we do. But of this last act of the day he tells us nothing. 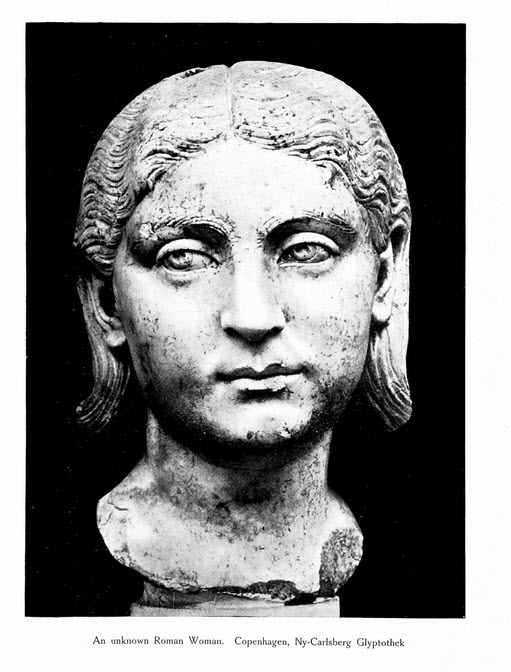