THE LATIN OF THE COMMON PEOPLE - PART V

Under the head of syntax we must content ourselves with speaking of only two changes, but these were far-reaching. We have already noticed the analytical tendency of preliterary Latin. This tendency was held in check, as we have just observed, so far as verb forms were concerned, but in the comparison of adjectives and in the use of the cases it steadily made headway, and ultimately triumphed over the synthetical principle. The method adopted by literary Latin of indicating the comparative and the superlative degrees of an adjective, by adding the endings -ior and -issimus respectively, succumbed in the end to the practice of prefixing plus or magis and maxime to the positive form. To take another illustration of the same characteristic of popular Latin, as early as the time of Plautus, we see a tendency to adopt our modern method of indicating the relation which a substantive bears to some other word in the sentence by means of a preposition rather than by simply using a case form. The careless Roman was inclined to say, for instance, magna pars de exercitu, rather than to use the genitive case of the word for army, magna pars exercitus. Perhaps it seemed to him to bring out the relation a little more clearly or forcibly.

The use of a preposition to show the relation became almost a necessity when certain final consonants became silent, because with their disappearance, and the reduction of the vowels to a uniform quantity, it was often difficult to distinguish between the cases. Since final -m was lost in pronunciation, Asia might be nominative, accusative, or ablative. If you wished to say that something happened in Asia, it would not suffice to use the simple ablative, because that form would have the same pronunciation as the nominative or the accusative, Asia(m), but the preposition must be prefixed, in Asia. Another factor cooperated with those which have already been mentioned in bringing about the confusion of the cases. Certain prepositions were used with the accusative to indicate one relation, and with the ablative to suggest another. In Asia, for instance, meant "in Asia," in Asiam, "into Asia." When the two case forms became identical in pronunciation, the meaning of the phrase would be determined by the verb in the sentence, so that with a verb of going the preposition would mean "into," while with a verb of rest it would mean "in." In other words the idea of motion or rest is disassociated from the case forms. From the analogy of in it was very easy to pass to other prepositions like per, which in literary Latin took the accusative only, and to use these prepositions also with cases which, historically speaking, were ablatives.

In his heart of hearts the school-boy regards the periodic sentences which Cicero hurled at Catiline, and which Livy used in telling the story of Rome as unnatural and perverse. All the specious arguments which his teacher urges upon him, to prove that the periodic form of expression was just as natural to the Roman as the direct method is to us, fail to convince him that he is not right in his feeling--and he is right. Of course in English, as a rule, the subject must precede the verb, the object must follow it, and the adverb and attribute adjective must stand before the words to which they belong. In the sentence: "Octavianus wished Cicero to be saved," not a single change may be made in the order without changing the sense, but in a language like Latin, where relations are largely expressed by inflectional forms, almost any order is possible, so that a writer may vary his arrangement and grouping of words to suit the thought which he wishes to convey. But this is a different matter from the construction of a period with its main subject at the beginning, its main verb at the end, and all sorts of subordinate and modifying clauses locked in by these two words. This was not the way in which the Romans talked with one another. We can see that plainly enough from the conversations in Plautus and Terence. In fact the Latin period is an artificial product, brought to perfection by many generations of literary workers, and the nearer we get to the Latin of the common people the more natural the order and style seem to the English-speaking person. The speech of the uneducated freedmen in the romance of Petronius is interesting in this connection. They not only fail to use the period, but they rarely subordinate one idea to another. Instead of saying "I saw him when he was an ædile," they are likely to say "I saw him; he was an ædile then."

When we were analyzing preliterary Latin, we noticed that the co-ordination of ideas was one of its characteristics, so that this trait evidently persisted in popular speech, while literary Latin became more logical and complex.

In the preceding pages we have tried to find out the main features of popular Latin. In doing so we have constantly thought of literary Latin as the foil or standard of comparison. Now, strangely enough, no sooner had the literary medium of expression slowly and painfully disassociated itself from the language of the common people than influences which it could not resist brought it down again to the level of its humbler brother. Its integrity depended of course upon the acceptance of certain recognized standards. But when flourishing schools of literature sprang up in Spain, in Africa, and in Gaul, the paramount authority of Rome and the common standard for the Latin world which she had set were lost. When some men tried to imitate Cicero and Quintilian, and others, Seneca, there ceased to be a common model of excellence. Similarly a careful distinction between the diction of prose and verse was gradually obliterated. There was a loss of interest in literature, and professional writers gave less attention to their diction and style. The appearance of Christianity, too, exercised a profound influence on literary Latin. Christian writers and preachers made their appeal to the common people rather than to the literary world. They, therefore, expressed themselves in language which would be readily understood by the average man, as St. Jerome frankly tells us his purpose was. The result of these influences, and of others, acting on literary Latin, was to destroy its unity and its carefully developed scientific system, and to bring it nearer and nearer in its genius to popular Latin, or, to put it in another way, the literary medium comes to show many of the characteristics of the spoken language. Gregory of Tours, writing in the sixth century, laments the fact that he is unfamiliar with grammatical principles, and with this century literary Latin may be said to disappear.

As for popular Latin, it has never ceased to exist. It is the language of France, Spain, Italy, Roumania, and all the Romance countries to-day. Its history has been unbroken from the founding of Rome to the present time. Various scholars have tried to determine the date before which we shall call the popular speech vulgar Latin, and after which it may better be styled French or Spanish or Italian, as the case may be. Some would fix the dividing line in the early part of the eighth century A.D., when phonetic changes common to all parts of the Roman world would cease to occur. Others would fix it at different periods between the middle of the sixth to the middle of the seventh century, according as each section of the old Roman world passed definitely under the control of its Germanic invaders. The historical relations of literary and colloquial Latin would be roughly indicated by the accompanying diagram, in which preliterary Latin divides, on the appearance of literature in the third century B.C., into popular Latin and literary Latin. These two forms of speech develop along independent lines until, in the sixth century, literary Latin is merged in popular Latin and disappears. The unity for the Latin tongue thus secured was short lived, because within a century the differentiation begins which gives rise to the present-day Romance languages.

It may interest some of the readers of this chapter to look over a few specimens of vulgar Latin from the various periods of its history.

The Oath of Strasburg of 842 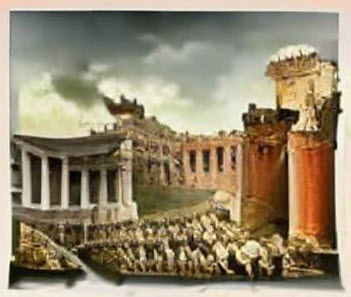